The GT Gets a Bath (and more)

The first order of business was to clean out all the junk that was in the interior and get it ready for a good vacuuming and wipe down. Out came bags with an assortment of old and new parts, old cleaning supplies and bits and pieces of deteriorating carpet. It was obvious from all the old acorns and debris, that the car had been the home for quite a few squirrels, rodents and other animals as it sat outside for the past years. The trash can was quickly filling up.

One area that I was particularly interested in was what was hiding in the locked glove box. My past experiences have told me that they are always a treasure trove of forgotten papers and personal item that can act as a time capsule and give you a glimpse into the previous life. Since I still did not have the keys for the car, I tried several other keys from other cars in the hope of having a bit of good luck. Unfortunately, none of the keys worked so I had to resort to unbolting the door hinge from under the dash. When the door finally came free, I found that the glove box was full of old papers and receipts from its life out in California. While there was nothing surprising in the paperwork, it still showed the registration info on the original owner and the type of work that he had done to the car over the years. It also included the original owner’s manual from the dealer with hand written notes from the buyer. Very Cool!

After surveying the glove box contents, it was time to get down to some serious cleaning. Thankfully my trusty shop vac was up to the task of helping to clear out years of accumulated dirt and debris along with all the evidence from the multiple previous  inhabitants (read: squirrels, mice, chipmunks, etc.). It definitely was full of nuts, nests and other “signs” that the GT had a lot more “owners” before I rescued it. In the end, I must have sucked up and taken out over 15 lbs. of  debris from the interior and engine bay.

Also, as I was cleaning the interior out, I started to pull out the rotting rugs and backing. This was going to have to be done at some point to be able to properly inspect and address any body issues, so I might as well make a big mess all at once. While I was at it, I pulled the bottom seat cushion. This will go to my house,along with the front seats and be cleaned and the leather rejuvenated with an awesome product from Color-Plus (http://www.colorplus.com/) out of Pennsylvania. This is an incredible leather care product line that can bring back and/or recolor even the worst leather damage. I recently used it on the original leather in my 1969 Rover 2000 TC with amazing results… 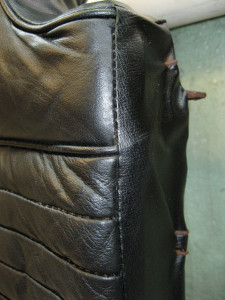 After working on the back of the car, I started on the driver and passenger areas and knew that things were going to get worse. Up came the carpet and what was left of the padding. I then pulled up the rubber floor matting and started to clean up the floors. The more I dug at them, the more it broke away. It looked like it had been covered with another rubber mat that had been possibly glued down to the metal floor boards in an attempt to patch up the deteriorating floors underneath. Without going too crazy, it was obvious that the floors were quite bad and would have to get cut out and replaced completely. The only real question is whether it will be half floors or full floors. That will have to wait until I can remove the seats and check the rest of the floors. (Fingers crossed) The only good news is that the passenger side seems in better shape, but it too will be replaced. 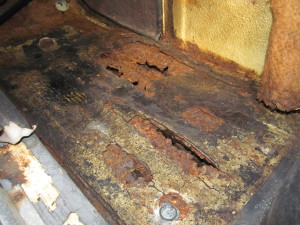 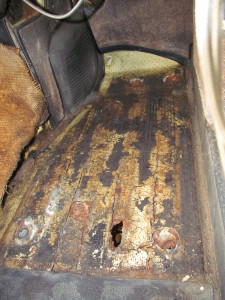 As I went through this clean-up process, I was also taking copious pictures. These will serve as a record for the before and after shots, along with acting as a reference on how things were originally put together. This is particularly helpful when replacing parts or doing rewiring. You can always look back and see how things went together or how the different color wires were hooked up. This is a BIG help as my aging brain has a hard time remembering things that just happened, let alone something that might have taken place months or years in the past. (Hopefully this resto won’t take that long…but you never know).

Once all the debris was out it was time for a good scrubbing. Naturally, the years of sitting had not been kind to the paint and body. There was a thick film of dirt, grim and green/gray slime that had taken hold and it was going to take more than just some soap and water to dislodge it and see what the true color of the car was again. The engine also needed attention and it’s best to work on it without all the grease and grim that come with a 46 year old car. Before starting to work in the engine bay, I was sure to seal up the carb intakes with paper towels and duct tape. I also wrapped the fuse box, starter relay and voltage regulator in heavy plastic secured with more duct tape. (I’m not sure how the world existed before tie wraps, duct tape and silicon adhesive caulk). Once everything was sealed up, I liberally sprayed the entire engine and compartment with Gunk Engine Cleaner Gel and let it sit while I focused on the exterior.

To tackle the heavy grim I mixed up a batch of 50% strength Simply Green Purple Power HD Degreaser in a pump sprayer and completely soaked the car with it. (A note of caution…Purple Power will attack aluminium. Do not use it on aluminium, especially at full strength. If it does get on it, rinse it immediately).  After the car was covered and had soaked in a bit, I hooked up my trusty pressure washer and went to town on the dirt. With the spray pattern adjusted fairly tightly, the dirt and grime was quickly blasted away and the original color started to come through. It took a lot of time and careful applications of the powerful spray, but the results were undeniable. Years of dirt, mold and neglect melted away to reveal the diamond underneath…well maybe not a diamond…but a CZ at least. I also found out what rubber seals were weak or non-existent and tried to keep as much water on the outside of the car as possible. I did OK, but the interior still got a bath in the process and I still don’t know how I got the inside of the windshield wet. 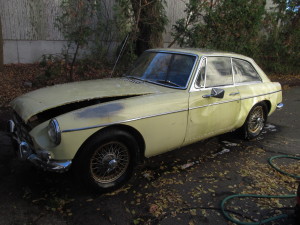 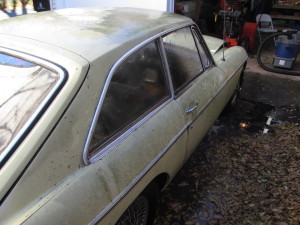 Once the outside was clean, it was time to attack the engine bay. While the results were not as dramatic, it was good to get the mechanics cleaned up and the majority of the grease off. While I was power washing the engine bay, I noticed that the black undercoating was flaking away. I’m not sure if this was an original coating from the factory or something that the owner added later. If anyone knows, please post a comment so I know whether or not to include it in the work. While I am not a purist that needs my cars to be all original, I am hoping to keep this GT as stock as possible, while making some modern upgrades that will improve performance and handling, but not be glaringly obvious. After the engine was all rinsed off, I went back over it with my air gun to blow off the standing water and try to dry it out as much as possible. It was forecast to drop into the 20’s overnight and I really didn’t want a huge ice cube for an engine. 🙂 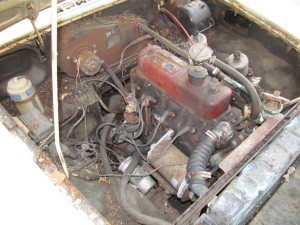 As the afternoon wound down, I wrapped things up and surveys my day’s work. While the car is still definitely a project and will take many man hours and dollars to restore it back to its original glory, it was looking better than it had in years. It was clean (kind of) and ready for the next steps and I had gained some more insight to just how much work I was in for. It certainly won’t be a quick fix, but I still think I can get the car running and road-worthy by spring time. We will just have to wait and see.