Projects push the GT further down the list….for now (Part 2)

Man does not live by LBC’s alone and variety is the spice of life as they say. Now I’m not into spicy things, but my mechanical interest are wide ranging and diverse. I share this with my son, Nathanael, who is on his way to surpassing his old man at the tender age of 25. He has owned many, many cars, a Jeep, two four wheelers and several trucks. His current fleet includes a Dodge Ram 1500, lifted to the sky and sitting on huge tires that makes it all but impossible for anyone to get in and out of it gracefully. His friends all have trucks and since misery loves company, I thought I might consider getting one of my own.

It was not a simple decision, as I had been warned that I had reached the limit of cars I could have and that if any more showed up, I’d be sleeping in the garage from now on. This didn’t dissuade me from wanting one and I eventually was able to win the wife over with the argument that I really needed one to haul all the bits and pieces around when I was working on my cars. I might even use it to haul my finished cars to shows on the yet-to-be-acquired trailer (more on that later). Word went out that I was casually looking for a truck and Nathanael’s friend Brian, also a truck nut, soon located the deal of the century…a 1998 Dodge Ram 2500 with super low mileage. As with all things that seem to be too good to be true, this one eventually turned out to be the truck from Hell. I will spare you all the gory details, but let’s just say it sat in my driveway for close to 6 months and never moved from the spot where the wrecker dropped it. My only comment is that I hope that there is a special spot in Hell reserved for Dodge engineers. 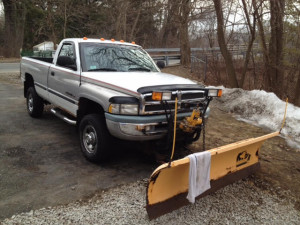 Not to be deterred by my experience with the Dodge brand or maybe because I secretly liked the pain, I eventually found another Dodge Ram 2500, this one a 1999 in the backwoods of Maine. This was a well-loved, bone stock model with absolutely no options except a decent radio and a PTO on the 5 speed transmission…yes, a real 5 speed tranny. Very cool! Once the deal was done and I got the truck down to MA, it became obvious that it wasn’t all that it seemed. Some people might say that I was blind to some of the signs of trouble from the get go, other may say that I was taken advantage of, but in the end, I got a truck I could use, that needed a little TLC and has ultimately proven to be pretty reliable and fun, despite its issues. As an interesting aside, I get no end of grief from my son and his friends over my truck and what a piece of crap it is. However, who is the first person they call when they need to tow something or their truck is in the shop and they need to borrow a ride? Me thinks they complain too much! 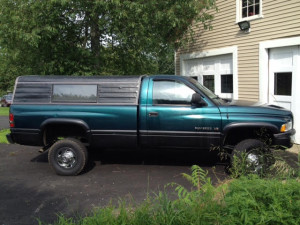 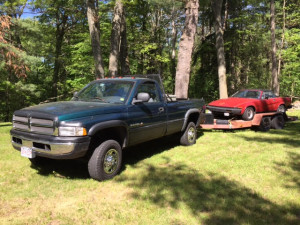 Now this is not to say that it doesn’t have it’s fair share of issues. The engine has 265K on it and smokes like chimney from bad valve seals and a leaking plenum. The thing has no sense of direction and wanders all over the road like a drunken sailor. We were able to tighten the front end up a bit by replacing the steering box and adding steering rack stiffener, but it really needs a new lower steering column. In the end, we decided that it was going to need an engine rebuild and we found another 2500 that only had 65K on it, but was totally rusted out from plowing. I was able to pick this rig up on the cheap and we proceeded to strip absolutely everything off the truck we could and took it right down to the frame. I kept the low mileage engine, some interior pieces, the steering column and some miscellaneous pieces. Between Brian, Nathanael and myself we ended selling almost everything off the truck, so that what ever was left could fit in the back of another pick up and was taken to the scrap yard. For once, we actually made some money on a vehicle purchase…but it takes a lot of time and energy and the shop was tied up for months! 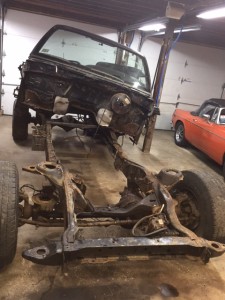 Oh, and during this time, I ran across a trailer that seemed to fit our needs in NH. That’s a whole story in itself and involved the BMW losing 4 out of 5 lug nuts, but we won’t get into that right now. As with most of my purchases, this one needs some TLC, being a home made trailer from 1985. It’s seen a lot of use, but is built like the proverbial brick sh*thouse. We were able to use it all last season for various projects and rescues and plans call for us to do a total rehab on it this summer. It definitely needs the welding talents of Natanael’s friend Brennan, as we reinforce it and redesign the fenders and such. We have already mounted a winch on it and that will prove invaluable.

So you can see I’ve been busy, but that’s not all, check out Parts 3 & 4 as they are posted. The fun continues.