Projects push the GT further down the list….for now (Part 1)

Worldwide Shipping. Visit Our Online Store. The Best Pharmacy Shop On The Web. Any One Would Really Like To Buy Cheap In The Drugstore From Home Below useful source Unreservedly. You Will Not Need To Visit The Doctor And Get A Prescription. Best Prices For Next Orders.
Online-Apotheke. Die Besten Niedrigsten Preise Für Alle Medikamente. Canadian Health Inc. Jeder Site-Besucher Verlangt, In Der Apotheke Zu Hause Unter [URRLL] Einfach Kostenlos Zu Sein! Sie Müssen Nicht Zum Arzt Gehen Und Sich Ein Rezept Ausstellen Lassen. Sie Versprechen Eine Schnelle Lieferung Per Kurier Oder Luftpost.
Kaufen Sie Generika Oder MARKEN-Medikamente Für Volle Kundenzufriedenheit. Beste Qualität Und EXTRA NIEDRIGE PREISE. Weltweiter Versand. Jeder Gast Möchte Auf Dieser Seite [URRLL] Einfach Günstig Aus Der Apotheke Von Zu Hause Finden. Sie Brauchen Kein Rezept, Um Die Pillen Zu Kaufen. Niedrigste Preise Und Zufriedenheitsgarantie.
The Very Best Pharmacy Store On The Web. Accredited Canadian Pharmacy That Provides Safe
He it is possible to purchase reputable viagra 25 mg within the drugstore from your home here overtly. Yes you have right to remain benefit from the purchase. Great discounts on weekends. The normal state of the heart and atrial fibrillation Arrhythmia – any violation of the regularity or frequency of the normal heart rate, as well as the electrical conductivity of the heart: Nosebleed without prescription Faint A sharp drop in blood pressure.
We all like to think that we are different and that it won’t happen to us, but as the saying goes, “Life is what happens while you’re busy making other plans”.  So while I had all the best intentions of getting to work on the MGB-GT after I set up my new garage, Life comes along and has other ideas. Now I’m not saying that it’s all been bad. In fact, I’ve been involved in some pretty fun projects and with some really cool people, but they have all served to distract me from my goal of getting back to work on the GT. I feel bad, but maybe not that bad, and I’m sure I’m not telling you anything that you haven’t experienced yourself. Kinda like preaching to the choir. All of this is my way of letting you know why there hasn’t been a lot of updates to this blog.

Soooooo, as a way to help justify my absence and to bring you up to speed on what’s been happening, I thought I’d share a few of those projects with you.

An MGB FINDS IT’S WAY INTO MY GARAGE…”Really Mom it just followed me home. Can we keep him, please?”
I don’t know how it happens, but wayward MGBs always seem to find me. This particular car was sitting up the street from my garage, looking rather tatty and forlorn with a handwritten For Sale sign on a discarded piece of cardboard. I resisted it for weeks and was told to “Don’t even think about it” from Linda. Curiosity eventually got the better of me and I took a closer look at the car and closer inspection validated my initial opinion that this was a junker. It had no title, it looked to have been sitting outside for quite some time, the top was junk and the interior was toast. It had been dragged up the driveway on locked-up tires, as the skid marks showed. “Move along…Noting to see here folks”. I should have listened to that voice in my head.

Instead, I started to dig a little deeper into the car. It was a split bumper car….interesting. While it was filthy, the body seemed pretty straight….more interesting. Inspection of the floorboards, rockers and undercarriage revealed a very solid body with little serious rust…I was hooked. After talking to the owner, I learned that it had been purchased from a lady a long time ago with the intent of him doing a restoration. Time got away and priorities changed (sound familiar?) and he now had to get rid of the car because his mother’s house was being sold and he had no place or time for it. He really hadn’t worked too hard at advertising it and I offered to help point him in the right direction and get it sold. Weeks passed and the car sat there, staring at me every time I went to the garage. I called him again and he said he just hadn’t had time to do anything or list it as I had suggested. Was I interested? No, No and NO! I didn’t need another MGB, I didn’t have the space or time for it and my wife would kill me. (This was the logical side of my brain speaking). He was insistent and said I knew more about this than he did and to make him an offer. I resisted mightily ( for about two seconds) I quickly decided to low ball him in the hopes that it would be a ridiculous number and that he would reject it. $200 I said. It’s yours, he replied.

Now what? I really didn’t want the car and I needed another project like the proverbial hole in the head. So I set about trying to come up with a plan. I went back and thoroughly inspected the car. I was in a lot better condition than I thought. Very dirty, but very solid. I did a bit of research and found that there was quite a market for the split bump cars and parts and that it had an aluminium hood. Now that’s a find! I needed a new hood for the GT, as I had damaged it in loading it onto the trailer when we picked it up. OK, things look better, I wasn’t gonna lose money on this after all. Things got even better when I went to pick the car up. The owner apologized that he couldn’t find the keys, but in his search he had found this part for it in the basement and gave it to me to go with the car. It turned out to be a NOS pillow dash pad, still in its dusty original packing. Score! These are worth $200-$300 and that basically paid for the car and the tow to get it to the shop. My aluminum hood was now essentially free.

I eventually came up with a plan to strip the car and sell off the parts. The body tub was the real value, as it was very solid with minimal rust and would make a great donor body. I would make a little money on the car and that would go into the GT or the garage. That sounded like a plan, but before I got a chance to start on it, I attended the Rover America meet where I stuck up a pleasant and innocent conversation with a mechanic friend from CT who also happens to be into Rovers, one Andrea Shea. I know Andrea from my work with him on my own Rover. He had helped us to rebuild the rear axle and front brakes and was a great mechanic. Talk turned to what else we were up to and I mentioned that I was working to get my 1998 Dodge Ram 2500 running and that I was going to work on stripping this ’71 MGB I had picked up. Andrea was curious about the MGB and we eventually agreed to go down to the garage after the event for him to see it.

Andrea was immediately in love with the car. He had always wanted a ’71 MGB and this one fit the bill and his budget. Would I be interested in a trade? What did he have in mind? He proposed that he would help get my pick up truck up and running and on the road in a barter deal to get the car. Hhhhmmmm An interesting idea. I still had the dash pad that basically paid for the purchase price, but was I willing to let the potential profit of parting it out go? I also didn’t want to lose the aluminum hood that I really needed. After a little back and forth a deal was struck. He would get the car, minus the hood, in return for his help with the truck. It was a win/win for both of us. Even more important, another MGB was saved from the crusher and will live on, loved and cared for by a British car enthusiast. 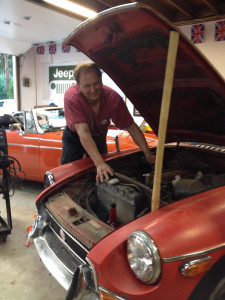