Out comes the interior…and more. 1

Generika Und Hersteller Medikamente. Diskrete Verpackung. Suche Über 500 Verschreibungspflichtige Medikamente. Jeder 1 Möchte Normalerweise Einen Niedrigeren Wert Innerhalb Der Drogerie Von Zu Hause Aus Kaufen, Der Hier Aufgeführt Ist like it! Sie Brauchen Wirklich Kein Rezept, Um Die Kapseln Zu Bekommen. Sie Können Dies Auch Tun, Wenn Sie Kein ärztliches Rezept Haben.
While the last few weeks have been busy with the Thanksgiving and Christmas holidays, I’ve been able to carve out some time to work on the GT.  It’s cold up here in New England now and we had our first serious snow of the season, but the cold is no match for my trusty kerosene heater. It goes from 20 degrees to 70 in no time and I’m stripping off the heavy clothes in short order.

I’ve worked for several days on the interior. While it’s is really poor condition, care needs to be taken to remove everything correctly and label EVERYTHING…even the stuff that’s not going to be used again, which is most of it. From all appearances, the interior is completely original and pretty unmolested. Even in its sad condition, it will serve as a good template for the new interior and help me to find all the correct bits, pieces and upgraded hardware to put it all back together. One thing is for sure, the folks at Abingdon certainly didn’t scrimp on the screws! All the trim panels, carpet pieces and door panels had plenty of screws in them. Sadly, most of them were rusted and in poor shape. I hope to source new screws in stainless steel wherever possible and will need them in both polished and black painted finishes. (Anyone have any idea on good sources for these)?

After two good sessions working on the car, most of the interior was stripped out, the doors were stripped and the mechanisms oiled up and working again and all the seats and rear decking were removed and transferred to my basement to be refinished eventually. I am happy to report that the bodywork under and behind all the trim looked to be in good, solid condition and that the floorboards should be the only areas needing to be replaced. This is great news and only confirms my original impressions of the car. 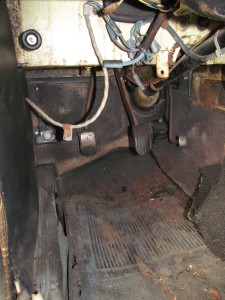 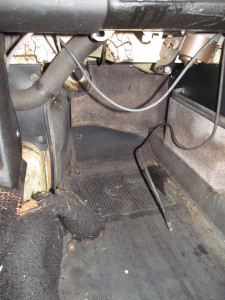 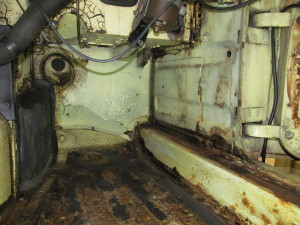 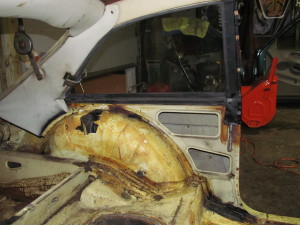 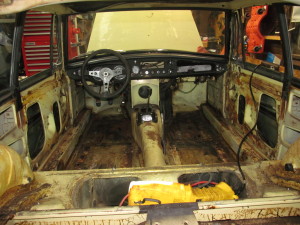 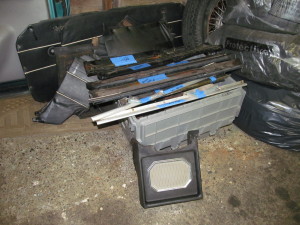 While I was walking around the car, grabbing tools, working on the workbench and doing the strip out, I kept looking at the crumpled grill every time I passed it. The more I looked at it, the more it bothered me. Eventually, I couldn’t take it any more and decided to take it out. While the car looks a little toothless without the grill, it’s better than looking at the damaged grill and remembering what caused it…me. Once the grill was out, I just couldn’t bring myself to throw it away, despite the bad memories and it being worse than useless. Instead, it’s now screwed to the wall of my garage to remind me to think things through before just going ahead and doing it. 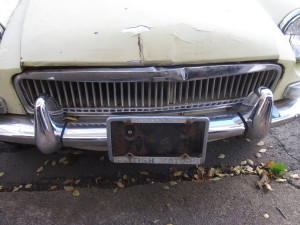 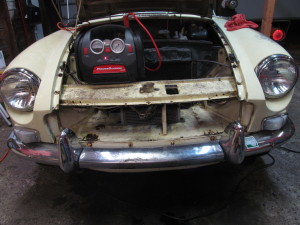 As part of taking the grill out, I also took off the original license plate frame from the dealer in California…Sunnyvale British Motors. I have both the front and rear plate frames and will have them re-chromed and then fill in the painted portions to match what they looked like when the car was delivered. It will be a nice touch and a connection to its origins.

Up next…I try to do a compression test, with mixed results