I attempt to do a compression test…kinda 2

So with that in mind, I set out to get a better idea of the overall condition of the engine. I knew that it hadn’t been run in a number of years, but supposedly ran when it was parked and was a low mileage car. We also knew that the engine at least turned over, the oil was looking good and that there didn’t seem to be any water in the pistons…all good signs. We also knew that the car would not start on its own, but would turn over on the starter motor and a battery connected to the starter solenoid.

Now I can’t say that I ever have done a compression check, but know that it is a good determiner of an engine’s health, or lack there of. Good, consistent pressure across all four cylinders is the ultimate aim. Widely varying or non-existent readings are not a good sign and usually precede an full engine rebuild.  This alternative is not in my plans, as I have a limited budget and would really rather spend the large sums needed to do an engine rebuild on other mechanical systems, the interior or maybe even bodywork. However, only a fool builds a house on a faulty foundation and if the car is not sound both mechanically or structurally, then then project cannot go forward or we need to have a serious rethink about our plans.

The first issue I needed to resolve was to get a good power source to help turn the engine over at a good pace. I had a first rate jump pack available and a spare battery that I could top off the charge on, so that issue was resolved. I had also recently purchased a decent compression tester kit through AutoZone (thx Nathanael) and I actually took the time to read the enclosed instruction. Issue number two down. All that was really left was to hook up the gauge and get the engine to turn over, right? Well not really.

If an engine has even fair compression, trying to turn an engine over with the spark plugs in place can be a bit challenging. The build up of pressure in the other three cylinders as you test one, can make turning the engine over easily a bit of a chore, especially if you don’t have the full umph of a good battery. I can say all this in hindsight, as my first few attempts were a bit lame and gave useless results.

Back I went to the instructions and saw the error of my ways. I went back to the engine and removed all the plugs and had much better results this time. The engine turned over pretty well and I was able to build up good pressure in each of the cylinders as I tested them. I brought up each cylinder several times and made sure I got the same reading each time, or something very close. In the middle of testing, I ran down the jump pack and had to switch over to the back-up battery. In the end, my results were as follows… 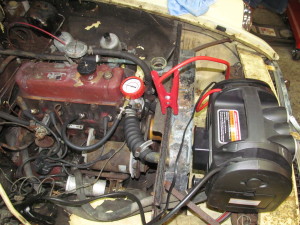 The wide variance of 30 lbs from lowest to highest was a bit concerning, but I felt this was an initial test on an engine that hadn’t run in many years. It was also a “dry” test, as obviously there was little if any oil lubricating the pistons.  I was trying to be the eternal optimist, so I wanted to do a “wet” test and load up the cylinders and valve train with a good dose of the universal cure-all Marvel Mystery Oil (MMO).

This magic oil/supplement can be used in a number of ways…in the oil, in the fuel or as I intended, straight into the cylinders. Before leaving for the night, I loaded up each of the cylinders with 4oz of MMO and poured the rest of the bottle all over the valves. I put the valve cover back on and lightly screwed in all the spark plugs to keep any unwanted debris out and then went home.

I wasn’t able to get back to the car for a number of days,but that’s all the better to let the oil soak and do its magic. Upon my return, I hooked up the freshly charger jump pack and attempted to turn the engine over for my first test. Nothing! The engine refused to turn over. All I got was the steady click, click as I tried to engage the starter. I was beginning to fear the worst and after several attempts to resolve the problem from different angles, remembered that I needed to take the plugs out to relieve the pressure so the engine could turn. Once all the plugs were out and my compression gauge was hooked up, I hit the starter solenoid button and the engine turned over with vigor. My elation was short lived however, as the rotating pistons took their revenge on me and proceeded to spew out all the MMO I had so lovingly filled the cylinders with!!! Since I was bent over the engine and was trying to watch the pressure gauge, I was in the perfect position to get a full bath of the MMO as it geysered out the spark plug openings. While I managed to move my face out of the way, I wasn’t so lucky with the rest of me and my torso from shoulder to waist was covered in MMO (which BTW has a very pleasant peppermint fragrance). 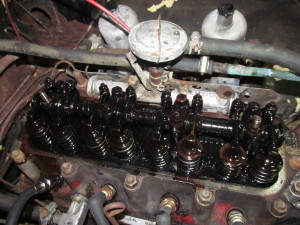 All I really could do was laugh, as the fault was totally mine. After cleaning myself up and throwing away a perfectly good sweatshirt, I went back to the engine and covered up the plug openings with a bunch of shop rags and proceeded to turn the engine over several more times until I was sure there was no more oil coming out of the engine. The side of the engine, the garage floor and my shop rags are now lubricated for life and I have learned a valuable lesson.

While I was pleased to see the expected increase in compression, I was concerned at the 60 lbs variation from highest to lowest and not on the same cylinders. In a conversation with Mike Crawford about this, he told me not to worry too much about these initial reading. Because the engine has sat for so long, they really aren’t that accurate and only after we get the engine up, running and do several heat up/cool down cycles will we be able to really to a true compression test. He was pleased at the intial results in the fact that they were all at or over 90 lbs, which indicated that there wasn’t immediate and serious issues with the engine.

This is all good news, I guess, but I would really like to know with certainty that the engine is OK or will need work. I guess this will have to wait until we can get the engine running correctly. That is going to take some time as the fuel and coolant systems need to be cleaned out and working properly. I have started to address these, but it will take a bit of time to get the needed parts and get things working after their long neglect.

That will be a story(ies) for another blog post!

2 thoughts on “I attempt to do a compression test…kinda”