Kein Rezept Erforderlich. Schneller Kauf Versand Und Lieferung. Bestellen Sie Günstige Verschreibungspflichtige Medikamente Zu Den Besten Preisen. Hersteller Von Arzneimitteln Im Internet Ohne Rezept. Völlig Kostenlose Muster Für Alle Bestellungen. Natürlich Möchten Sie Auf Dieser Internetseite [URRLL] Günstige Apotheken Von Immobilien Entdecken. Und Erhalten Sie Eine Völlig Kostenlose Lieferung. Suchen Sie Nach über 500 Verschreibungspflichtigen Medikamenten.
Canadian Pharmacy. Around The World Delivery. Buy Inexpensive Generic Drugs On The Web. He Would Like To Buy Accurate Within The Local Pharmacy In This On The Web Pharmacy you could look here Reliably. And Get Free Of Charge Transport. Bonus Ten Free Of Charge Tablets I Ve Received With My Buy.
You never know how things will turn out as you cross paths with new people as you go through life. I run into all types as I have pursued my hobby and I can say that almost all of them have been great people. British car owners are like that.

I ran across Paul this past summer at one of the car shows that the Boston Area MG Club hosts at Faneuil Hall. As is typical, we got to talking about the cars there and he made it known that he had an MGB GT that was previously his father-in-law’s and was now at his home near the Cape. He also said that he was interested in getting rid of it, as he had gotten a Corvette and the MG was now just taking space up in the driveway. Did I know anyone who might be interested and can we help him sell it? This immediately piqued my interest, especially when he quoted a very reasonable price (almost too reasonable).  I was quick to give him my card and urged him to call me so that we could arrange an inspection.

Fast forward a couple of months and I had not heard from the owner and had kinda put it of of my mind. I give out a lot of cards and get few contacts as a result, but that is pretty typical. So imagine my surprise when I got a call from Paul apologizing for the delay and asking if I was still interested. I certainly was and we made a date for me to go down and go over the car and meet his wife, Rachel, who was the actual owner.

I believe in the adage “You can’t judge a book by its cover”. That’s good, because most people would have taken one look at the car sitting forlorn and unloved in the driveway and have walked (or run) away. Thankfully, I’ve seen and owner worse and can always seem to see the diamond under the dirt, and in this case, it literally was dirt! 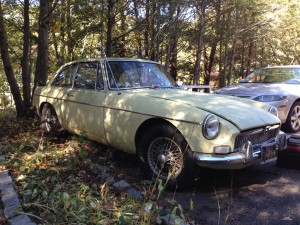 After going all over, under, in and out of the car, I was sufficiently comfortable with it to agree to the asking price and gave them a deposit. Since the car did not run, I was going to have to come down with a trailer to bring it back home.